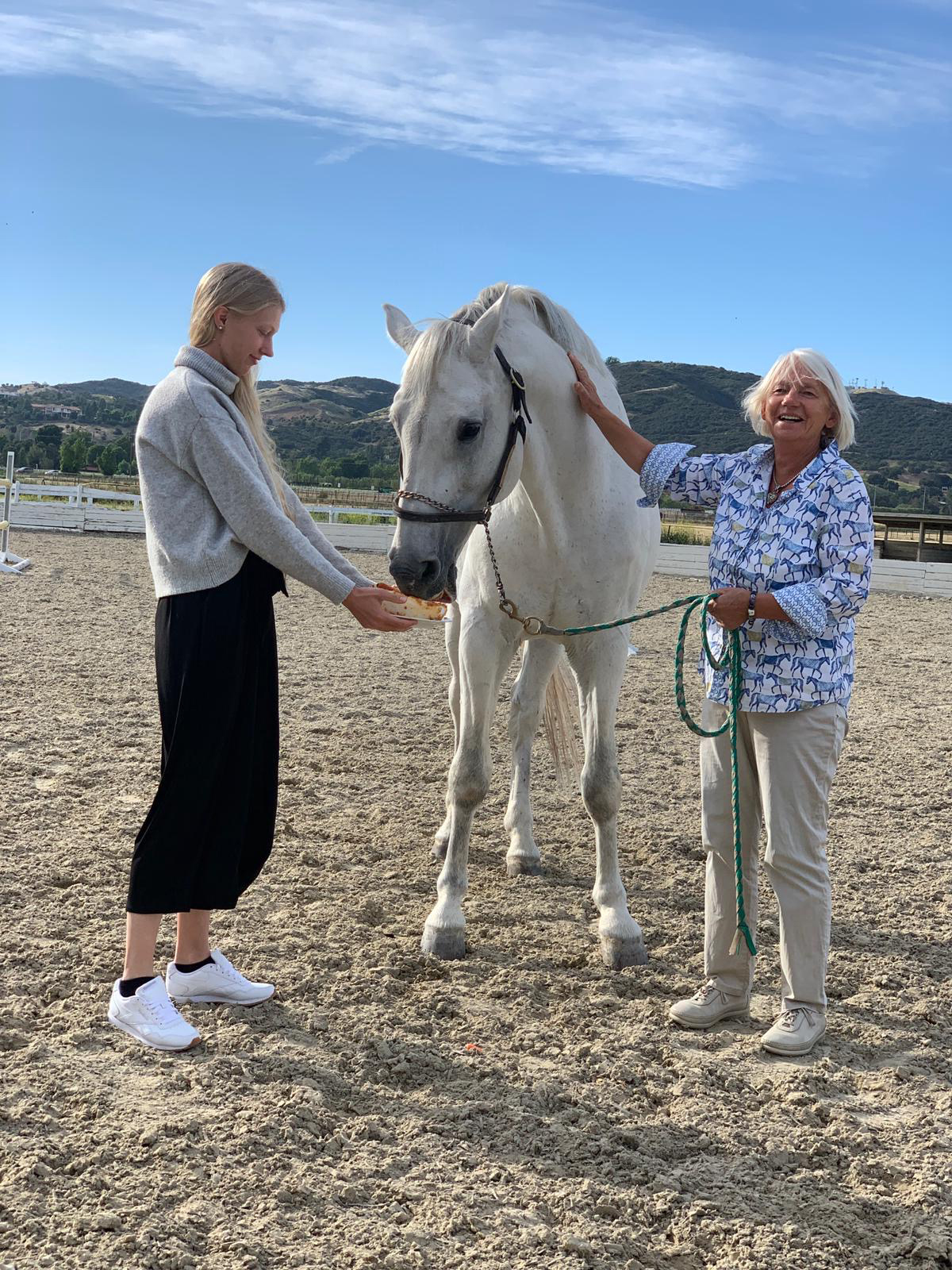 It was in 2001 that I travelled to Schleswig-Holstein in Northern Germany to attend the Holsteiner Auction and Stallion Approval. On my trip, I visited Hans Harmsen, a friend and breeder from whom I have purchased many horses over the years. The visit was purely social as I was not in the market for young horses at that time. Hans was working in the stable when I arrived. He opened each stall door and the yearlings all ran down the barn aisle and into the indoor arena for their daily exercise. I was watching the group of yearlings when I saw a dark grey, 1 ½-year-old colt running around. It was the most amazing canter I had ever seen. His steps were so light that they didn’t even make a sound when he touched the ground. I asked Hans, “Who is that grey colt?” He said that it was a Contender/Corofino/Landjunge. There was something very special about him and I had to buy him. A few months later he arrived at my farm in California. When we presented him as a 4-year-old stallion at the American Holsteiner Horse Association Stallion Inspection, Conefino received the highest scores. He earned a dream score of 10 in jumping ability, a 10 for technique, a 9 for canter and an 8 for walk and trot.

Contefino has always been a very athletic horse, intelligent and lively, with excellent rideability. I was the one that brought him daily to the turnouts and handled him during breeding season. He started with great riders like Tasha Visokay and Hannah Mauritzson. They both had fun riding him and I was lucky to have such good riders for a lively athletic young stallion. Another exceptional rider, Mandy Porter, presented Contefino during the Stallion Performance Test and trained him over jumps for 6 months.

When Contefino was six years old, I decided to send him to Germany. I felt that I would get a higher price for a young and inexperienced jumper with amazing talent. I sent him to a very well-known stallion owner and young horse trainer at Maas J. Hell Stable in Northern Germany. I had gotten quite attached to Contefino and was extremely sad when he left. To ensure that he travelled safely, I sent his rider, Hannah, along on the flight. Contefino is a highly intelligent horse and he got easily bored. He loved to play with toys and had a few in his stall, so we sent these to Germany with him. When he arrived, Hannah called and told me that the Mass Hell’s manager, Thomas, had thrown Contefino’s toys in the trash saying, “Anke is silly, he is a horse and not a child.”

I felt it best that Contefino get show experience in Germany before he would be available for sale. The shows are inexpensive in comparison to California. My phone rang constantly with inquiries about Contefino from very well-respected international riders and stallion owners but I had him on consignment with Stall Hell, so they needed to deal with them directly. Contefino went through a lot of changes at this point in time. At my barn, he was used to having sensitive handlers and riders but in Germany some of his riders were very tough. In my eyes, a little too much discipline for the young stallions, and since Contefino had no previous show experience, his initial competitions were over the bigger jumps in the six-year old classes. He was extremely careful, with lots of scope. We received many calls from people in Germany and Holland that had seen him at the shows, and some of them called him “a freak of nature.” Consequently, he was Approved by several European warmblood registries. Mass J. Hell Stable decided to purchase Contefino after the loss of their top stallion, Acorado. I was happy that he would be at a good stable where I could visit him anytime I was in Germany.

Contefino is an intelligent and sensitive horse, always willing to perform and try to do his job well. Unfortunately, during this time, Contefino colicked due to stomach ulcers and underwent surgery. I believe his ulcers were due to all the drastic changes and added stress at that time. Fortunately, Contefino recovered quickly and could go on competing at horse shows all over Europe.

A year later, I received a call from Stall Mass J. Hell to inform me that they have received a large offer for Contefino that they could not refuse. Contefino was sold to a well-known and very beautiful stable, Borgo La Caccia in Italy. I contacted the new owner, Giovanni Bonomelli, to purchase frozen semen that I had marketed in the states. I continued to follow Contefino’s show record. He had a few different riders and later competed in the International Grand Prix with the Italian international rider, Jerry Smith. Mr. Bonomelli had high hopes for Contefino to complete in the Olympics. Unfortunately, due to an injury, his jumping career ended. 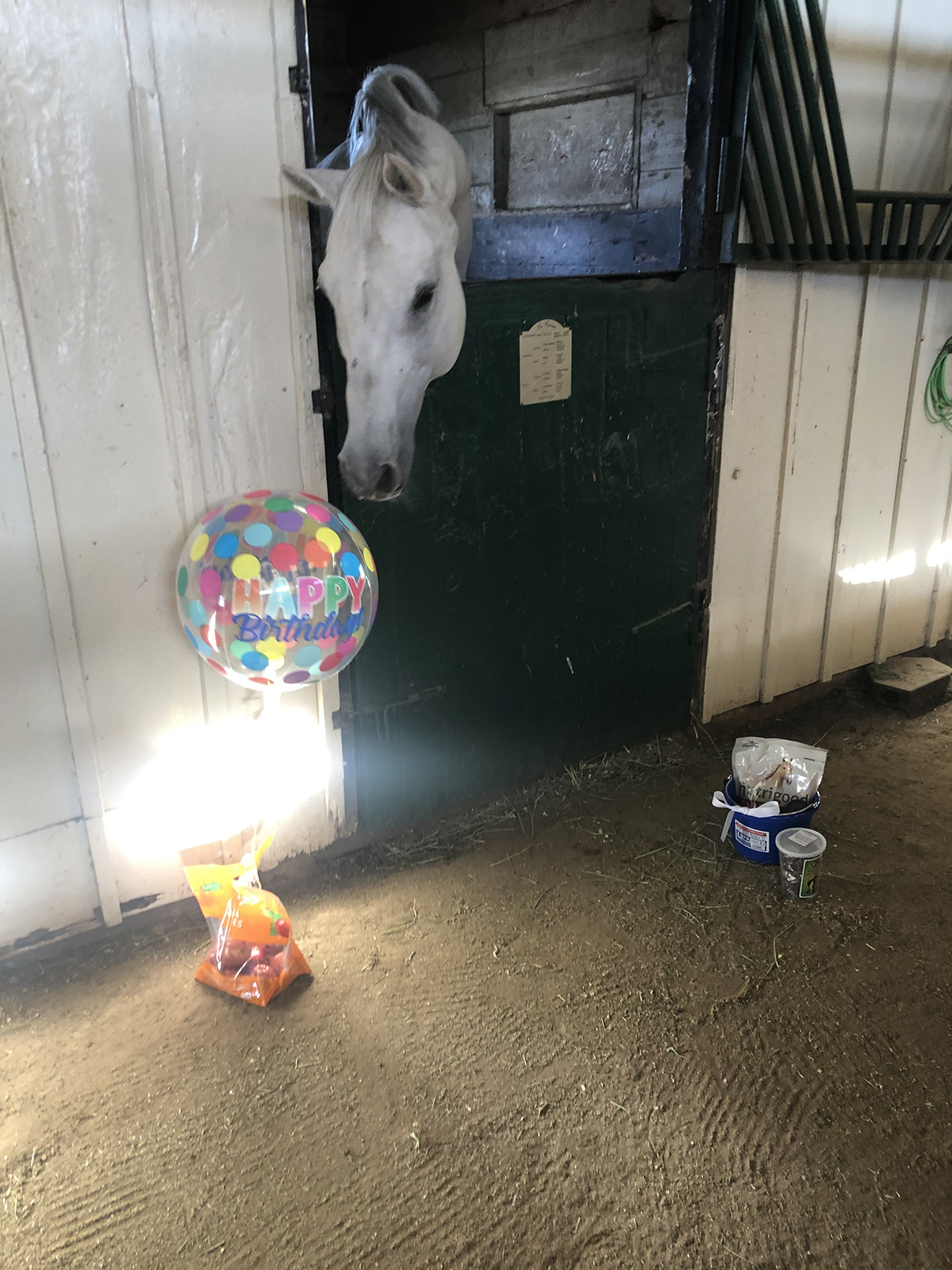 After I heard of his injury, I called Mr. Bonomelli to ask if he would be interested in selling him back to me as a breeding stallion because of his excellent offspring. I felt we needed him in the United States. His answer was, “No,” but he said he would consider leasing him to me. I flew to Italy with three of my friends to see Contefino and the beautiful Borgo La Caccia near Milano. When we arrived, we were moved by the beauty and size of the farm. They housed 200 horses, mostly Holsteiners. There were 25,000 roses planted throughout the property. Mr. Bonomelli took us into a large indoor arena where Contefino was running around. Watching from the stands, we could see riders trying to unsuccessfully catch him. I asked Mr. Bonomelli if I could go into the arena and help catch him. When I walked into the riding hall, I call to Contefino, “Baby”, like I called him in California. From a full gallop, he stopped on the other side of the ring and looked around at me for a few seconds, then trotted over to me. This was the first time he had heard my voice in six years. We were all surprised that he recognized me right away. My friends who were sitting with Mr. Bonomelli later told me that he got very emotional watching Contefino being so excited seeing me. He told them in his broken English, “Contefino is Anke’s horse.” After that the negotiations were easy, so I purchased Contefino that day. When I returned to California, I approached my friends, Peter and Thea Sprecher, with the opportunity of a partnership. Peter called me a few days later that he agreed to the partnership. I was so excited and relieved having such wonderful partners. My dream of getting Contefino back had come true, and he was on the next flight to America.

I have another stallion named Cortilo. He became extremely jealous of Contefino. The two stallions are stabled at opposite ends of the barn, but Cortilo can still see or hear when I take Contefino out or give him attention. Cortilo gets very angry. These two are always in competition for my attention.

Contefino is the most intelligent horse I have ever been around. The funniest thing is when we leave his halter on in his stall, it takes him less than 5 minutes to take it off and throw it over the stall door into the barn aisle. If we accidentally leave his boots on after putting him back in his stall, he carefully takes them off and throws them over the stall door. 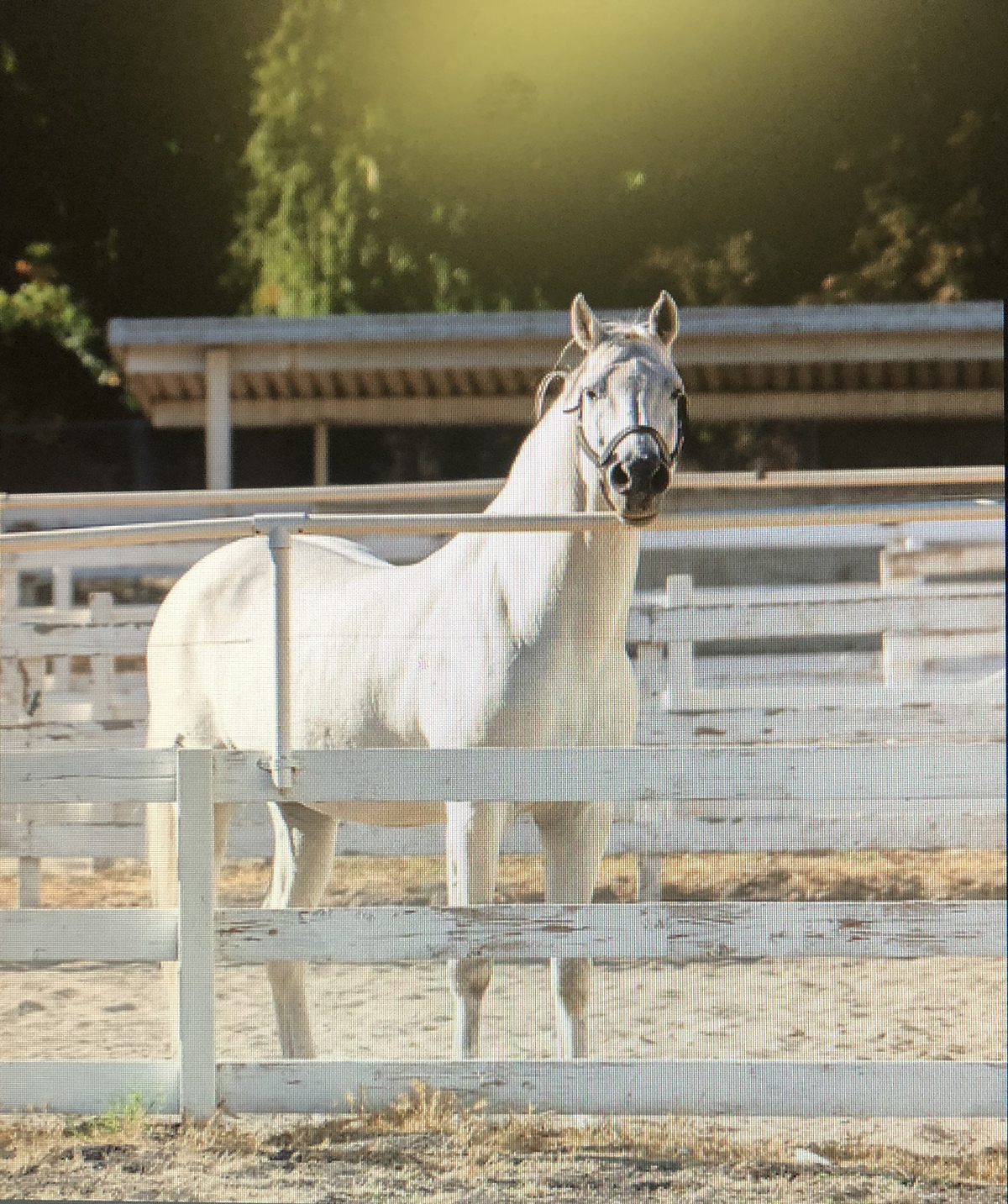 Contefino lets you know when he's ready to come in.

Another funny story has to do with Contefino wanting to stick to his schedule no matter what is going on. Contefino goes out to his paddock every day from 8AM to 10AM. One day, when I was busy with customers in the jumping arena and it was 11 o’clock, I saw Contefino with his lead chain in his mouth, that he took from the outside of the fence, waving it over to me to remind me it was time for him to go in. He loves being outside since his favorite thing is to watch his babies. He absolutely loves the foals but when he wants to go in, he will let you know.

I am very grateful to have a good quality stallion, as well as a very loving and kind friend.