"When I was riding with Peter, I bought my first broodmare as I had, for a long time, an interest in breeding. While I was riding I slowly acquired a few breeding mares and would have 1 or 2 foals a year. Then in 2007, I got pregnant and hung up my boots to have my son in 2008, but in that time I found myself having 4 foals due in 2009. So I moved the business to what is now Hyperion Stud. The new facility had a stallion barn complete with a lab and collection room, and so I jumped into the idea of having my own stallion. As Hyperion Stud was coming about, I had Jonathen Yates, my sales manager, go and have a look in Europe for the stallion I needed to truly be Hyperion Stud." 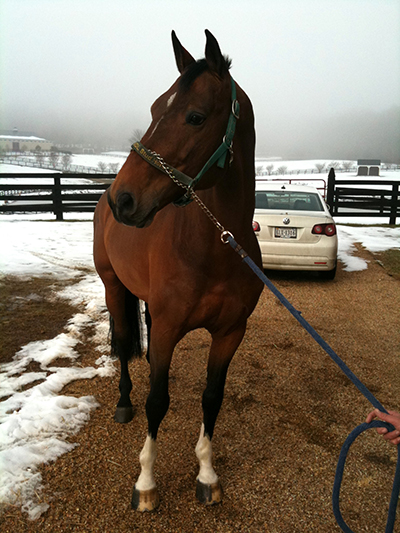 Imothep when he first arrived at Hyperion Stud from Europe

"I needed a stallion to represent Hyperion Stud and one that had a recognizable pedigree, who expressed a special talent for jumping and was easy to handle. Jonathen gave me options along with his overall assessment of the stallions and I chose [Imothep] because he had an easily recognizable pedigree and Jonathen believed he had the ability, so that's all it took. My decision was largely based on him being a son of Indoctro. This sire has produced hundreds of super sport horses and so with this recognizable pedigree, I thought that he would be interesting for breeders.

Imothep has certainly proven his ability since 2009, when he first came to the US as a 6-year-old. He has competed in show jumping at International events, including most recently the World Equestrian Games 2014 in France.

"The breeder of Imothep, Robert Hassing, resides in Holland and works with VDL Stud. He has been a big part of Imothep's career and last year we met up in Normandy and enjoyed the success at WEG together. Robert was also there in Belgium in 2011 to accept an award for the BWP when Imothep was given the Elite status, and most recently in 2015 went back to accept the stallion's award as an Ambassador. It's important to connect with the breeder of your horses. If it were not for their forethought and decision, these horses we love so much and bring us great joy would not be alive today.

"When Imothep was 2 years old he went to Tobias Galmbacher in Germany for his education. While there, Imothep was approved with several registries and was successful in young horse classes. In 2009 he had qualified for the World Breeding Championships for young horses in Lanaken, Belgium."

In the fall of 2009 Vicky imported him into the United States. She first met her new stallion "visiting him in Quarantine at Rigby Farm in Maryland. He was 6 years old at the time and fresh off the plane. He was bright eyed and beautiful. I was instantly smitten."

Vicky is a proud "mom," cheering Imothep on in his show jumping career from the beginning. "His sport career in the US started in Wellington and it was easy for me to be there for every class. The one thing I do after he comes out of the ring is rub his forehead and tell him he's a good boy. He's a bit saucy so he tries always to nibble on me.

"The other side of Imothep that I have gotten know well has been during his time in the breeding shed. He's the one we train people with who would like to learn how to handle the stallions for breeding. He's an absolute gentleman and through the years has learned how to behave accordingly during the times we are breeding and the times we are at the show.

"I was actually the first person to ride Imothep when he came to the US. He was easy but you could tell he needed more flatwork. He has a floating trot and big canter stride. It was a pleasure and perhaps one day I will ride him again. I know my 4 year old daughter wants to ride him and she'll get that chance.

"Imothep is a very laid-back stallion in the barn. He's happy. He loves to get his turn out, be groomed and bathed. He is a bit rambunctious at times when he's let out in his paddock. First a roll and then a buck. It's pretty much the same each time. When he comes home to Virginia it's always in April and it's for the breeders. This is a program we started with when he was 7 and it continues today." 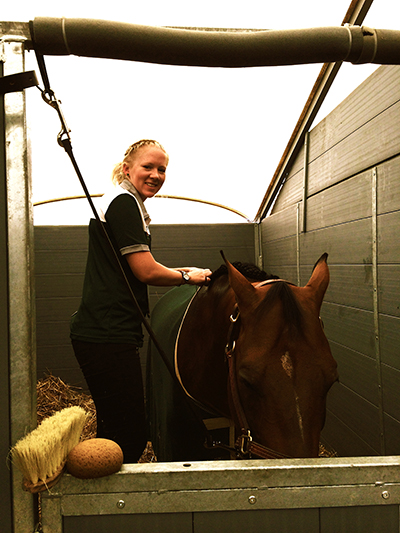 Imothep with his groom, Maria.

Because of his job, Imothep hasn't had a chance to develop a buddy in the barn, but he does have someone who is constant that he can depend on. "I would say his closest buddy is his groom, Maria (photo left). She spends a lot of time with him each day, travels with him and cares for him wherever they go. I think that with any horse, especially stallions, there is that one person that they need each day and for Imothep, that person is Maria.

"What I love most about this horse is that he is the perfect athlete! He knows when to turn it on and knows when he should be resting. He's confident on the inside and outside without being offensive or difficult. He's been tested so many times and it never seems to stress him out. Almost as if he expects the challenge and knows he has the ability to meet it.

"Imothep is now a fairly seasoned athlete. He loves the shows and competing. You can see his focus when he's standing at the in gate and often calls when he's in the ring. You can also see his love for the sport when he's bucking across the finish line! The most important thing for a horse like this is to make sure his routine is as consistent as possible. So do we do anything special? Not really, keeping it natural, easy and always being on time with his meals is the most important aspect of his life in the sport and on the road." And, of course, "he loves his carrots!" 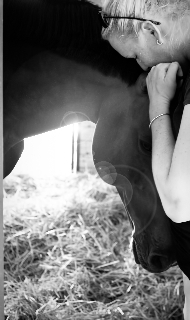 "I've gotten to the point where I gush about him because he's incredibly beautiful and immensely talented. However, I don't really talk to people about how deeply special he is to me because I don't really have the words. I am grateful to have this horse in my life and for him to be the face of Hyperion Stud. No one could have predicted that the first stallion I ever purchased would become this incredibly important and successful.

"I'm a firm believer that this was meant to happen as it has and it is then my responsibility to always try and do the right thing for him by supporting his career and helping him build a legacy. I want to see him in the history books as not only a super jumping horse but a top breeding stallion."
Read Imothep's Stallion Profile
Browse our Stallion Gallery
Browse all Stallion Stories