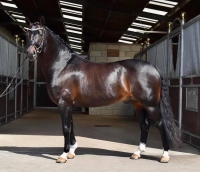 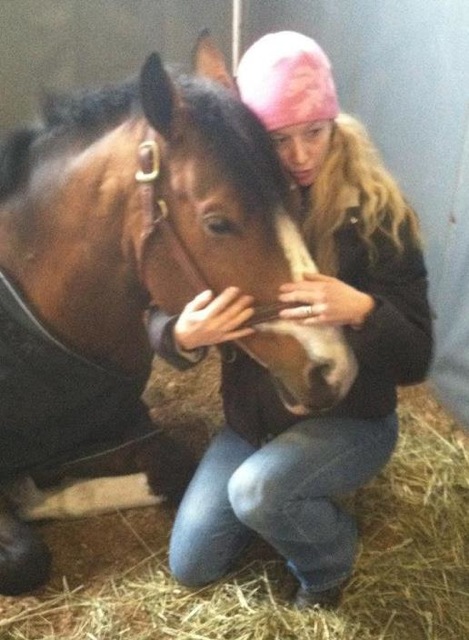 Ahna Cafaro has a special bond with her stallion, Amazing, in part simply because they spend a lot of time together. "He lives at home with me, so we spend so much time together. I really think that's it: time. I do everything with him, so we're a team. I broke him myself, so have been pretty much the only one to ride him. And until recently, I didn't have an arena, so in order to ride him I had to trailer him to one of several farms in the area. There were weeks he was on that trailer five days a week and we were together constantly. That really went a long way in creating that bond."

Of course, Amazing's personality helps. As Ahna puts it, "His best traits are on the inside. He is very sensitive and really wants to please his people. He is happiest when I am hanging out in his stall and giving him scratches. One of my favorite things he does is show me where he wants to be scratched or massaged. I'll start scratching, and then say 'show me where' and he'll reach around and touch his nose to where he wants to be scratched. He really is just a giant lap dog." 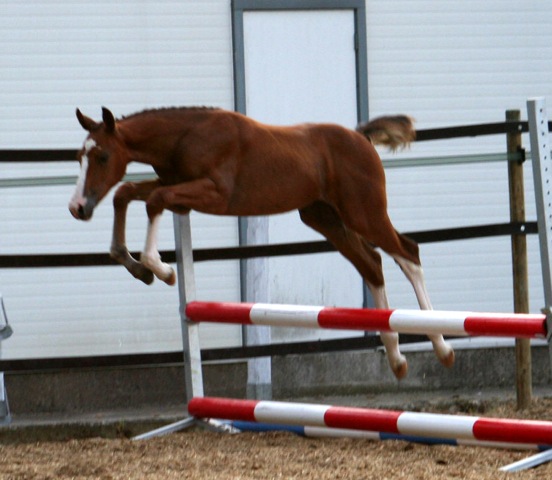 Ahna first saw Amazing on Benny DeRuiter's website in Holland for sale as a foal in 2005. Later, he was imported to the US by Silver Creek Farm, in Oklahoma. "I saw him again a couple of years later for sale online, and, not knowing it was the same horse I had admired as a baby, showed my husband the ad for my 'dream horse.' He's the one that pointed out it was the same horse as the foal I had been drooling over a while back." Ahna wasn't looking for a stallion, but this two-year-old colt "was everything I had ever imagined owning: bay, white markings, Olympic breeding, and so very athletic. I emailed the seller, and I was devastated to hear that the horse was as good as sold, and there were three other people in line if that sale fell through. With dismay, I asked them to please let me know if he became available. Two days later, they emailed and said the sale fell through, but they were not holding him for anyone; first one with a check gets him. My very incredible husband said 'go book a plane ticket and get your horse.'

"The minute I saw Amazing, I knew he was mine. Sweet, oh, how sweet he was! When they turned him loose in the ring, his power and grace took my breath away. It's a rare thing to have a true connection with a horse, but I felt like this incredible creature had always been mine. I whispered to him 'if you go through that jump chute and jump those flower boxes like it's no big deal, you are coming home with me.' He promptly made his own way to the jump chute, jumped through effortlessly, and trotted right over to me as if to say 'was that good enough?' Yes, Buddy, yes it was." 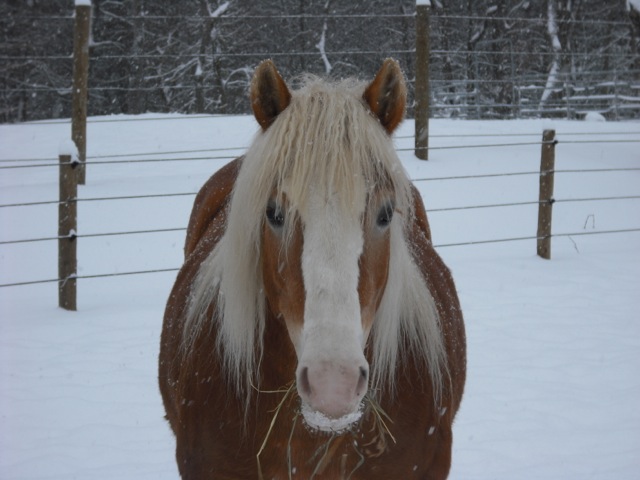 Ahna reports that Amazing is the best-mannered of all the horses in the barn. "He's very laid-back and most of the time you'd never know he was a stallion. He does like to know where all of his 'herd' is, so if someone goes over the hill out of sight, he's on high alert until he can see them again. Otherwise, he pretty much sleeps and eats!" His best buddy, Doc, is a Haflinger. "Doc is my husband's Haflinger and they are stabled next to each other. Amazing lets Doc steal hay from his mouth, and they like to share a hay net. The other day I caught Doc licking crumbs of Amazing's breakfast off of his muzzle. They really are adorable." Another adorable moment is when Ahna's two-year-old nephew sang Amazing to sleep by petting his forelock and singing "Soft Kitty, Warm Kitty" from The Big Bang Theory.

"The thing that cracks me up every time is how much he HATES rain. To see my big tough stallion (yeah, right!) trying to hide from the rain is a riot. He has one very sparse pine tree in his field, and at the first hint of a drizzle, he huddles under that sad tree, trying to make himself as small as possible to not get wet.

"At a show, if he takes less than five naps a day, I get worried. And I mean flat out, snoring, dreaming, and nickering in his sleep naps. He's a pro.

"He loves to snuggle, and that's my favorite thing. I love that he is kind."