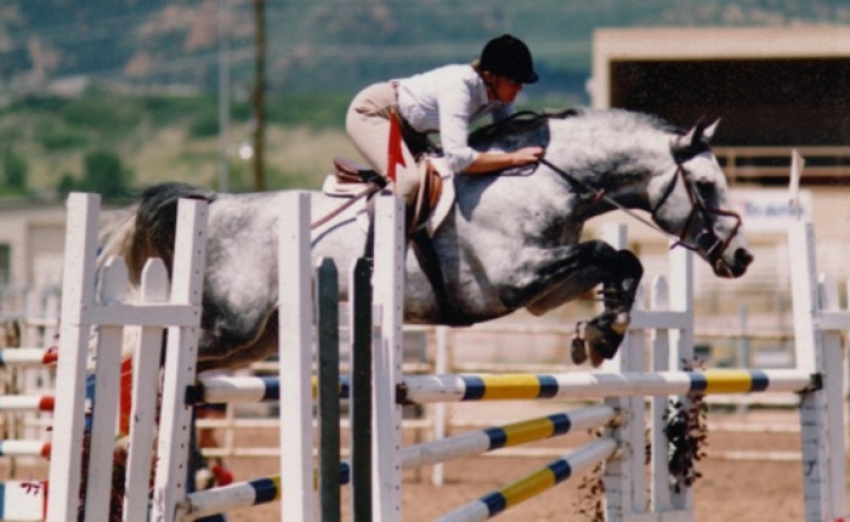 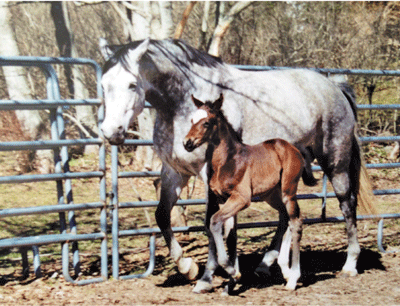 Inamorato is a Trakehner stallion who was conceived in Germany out of a Premium Mare, Indira XV, whom we purchased from the Keunecke family, breeders of Imperio. He was sired by EH Buddenbrock of Hörem, stallion station of Hubertus Poll. Inamorato is a result of generations of illustrious Trakehner pedigrees and dedicated breeders who stressed not only Trakehner type but lifetime performance.

The first trimester had quietly passed when Indira XV was imported, and the long winter ended in a snowy St. Patricks Day in 2001. Of course I was at work, in an ICU, when I got the call that Indira was foaling. I made quick work of handing off my report, and raced home in the setting sun's rays. We were thrilled to welcome our huge and healthy colt. Our youngest son was so impressed with his size that a scale was brought to firm ground, he lifted the 140 lb. colt, staggering to weigh him, and brought him from the snow into his straw palace. 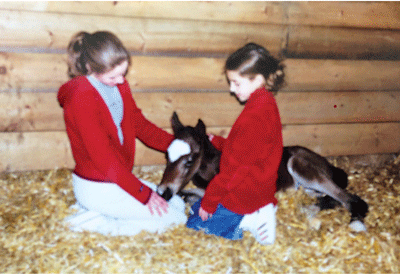 Inamorato was blessed with the classic "Superman" blaze which, to this day, is his color trademark at the horse shows.

Inamorato learned, at an early age, that trail rides to the beach in any season meant he could run at breakneck speed in and out of the water, experiencing a freedom and exuberance that fostered a comfort and trust in any environment, while his dam patiently watched. 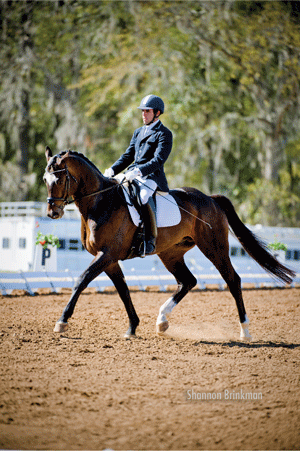 Breed shows followed with much success and an under-saddle career was begun in his 3rd year after his ATA stallion approval in 2003. From Hunter and Jumper training and competitions to Dressage training, leading up to his Eventing career, Inamorato certainly developed a versatile and successful resume.

As fate would have it, Inamorato was to be faced with not only a Lyme diagnosis that challenged his under saddle development, strength, comfort and recuperation, but also varied training and competition years as his performance test needed to be completed for his lifelong Stallion Licensing with the ATA.

While in training at Valhalla Farm in Florida, and finally comfortable, Inamorato experienced performance success under Andrew Palmer at the Preliminary Level. Breeding as well as competitions followed, so that others could have not only "that croup" but the equine personality, athleticism and beauty that is Inamorato. 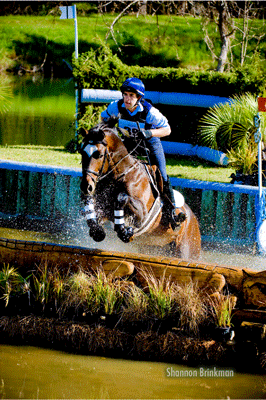 An eventing career is the triathalon of the equine competitions. Inamorato has experienced success up to CCI* level despite his lifetime diagnosis of Lyme.

Early in 2014, due to a flaw in trailer design while traveling, Inamorato suffered an almost fatal injury to his right front leg. Thanks to Andrew's quick response, Tiffany's cell phone to recruit the help of fellow eventers Jill Henneberg and Rick Wallace - and expert Veterinary treatment - Inamorato survived shock, ICU, surgery and recovery at Peterson and Smith. We can't help but think that putting him in Quarantine for his reproductive "work" for Australia, NZ and the EU, as his rehab from his surgery, must have put those "good endorphins" to work in his favor! Not even six months later, Inamorato is back doing 3rd level dressage and jumping a 3-foot course, getting ready for Dressage competitions and the George Morris Clinic at the ATA meeting in Ohio in October. Tiffany and Andrew are thrilled to have their "superpony" continue to show his "game on" constitution, willingness, kindness and drive. 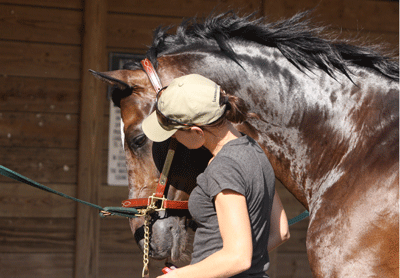 Owning a Stallion is a commitment and religious experience, laced with equal measures of breathless anticipation and joy. We had never thought that our lives with horses would bring us such experiences, in human friendships and breeding connections. We quickly realized that a larger external hard drive was crucial for the thousands of photos and international communications that keep accumulating.

History through the centuries has been made thanks to the Trakehners. History will continue to be written thanks to the humans that believe in this historic original Warmblood breed of East Prussian origin, home of my ancestors.