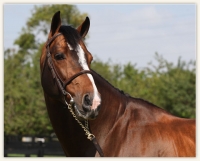 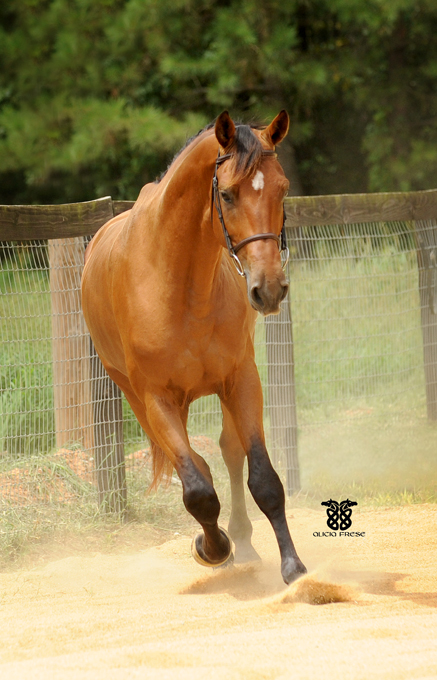 Diabolo d'Esquelmes is 2009 sBs stallion known at home as DD. He is owned by Ronda Stavisky, and was imported from Belgium, where he was bred by Daniel Maillart.

"If Diabolo d'Esquelmes were a person," says Ronda, "he'd be a CEO. He loves his jobs - both showing and breeding. He is all business, but also loves a good trail ride and hanging out."

Ronda's earliest memory of DD is as "the cute long yearling in the middle of winter in Belgium. He was in an indoor arena and we were watching him free jump. He kept coming over to say 'hi' to us. Very friendly and nosey from the beginning!" She was in Europe specifically to look at stallions, and Diabolo d'Esquelmes was the first one she said "yes" to. She also bought Cartier R on that trip, the cover stallion of
Warmblood Stallions of North America
2014. "So, I'd say we picked well!"

"I have met his breeder - Daniel Maillart - and see him every year when I visit Belgium. Daniel keeps up with Diabolo on Facebook. He has an incredible breeding program in Europe - producing horses at the top of the sport. So, Diabolo is destined for great things!" She bought him from Luc Henry, a breeder and dealer in Belgium who is a breeder himself as well as raising likely prospects from other breeders. 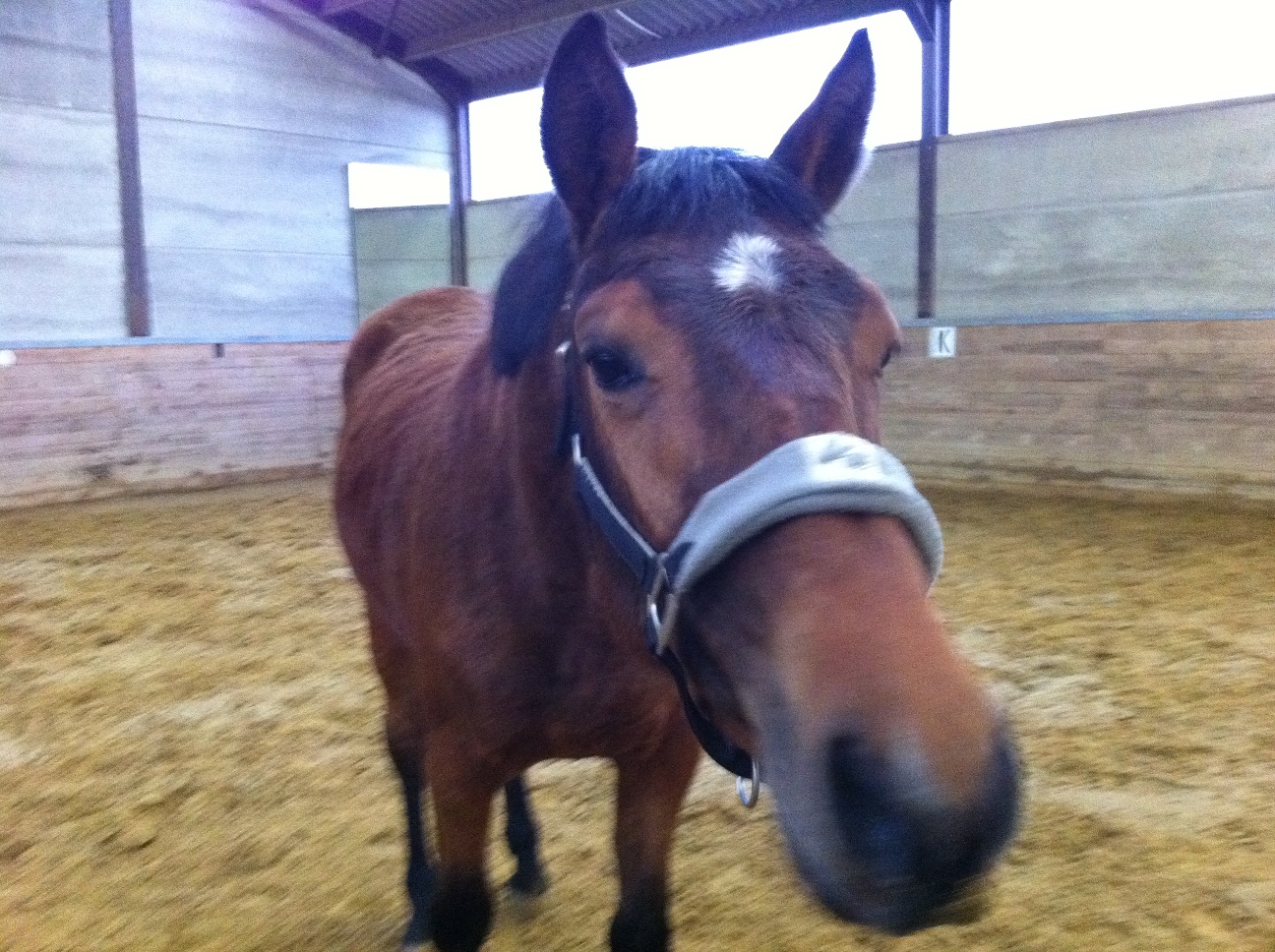 She has pictures of him from that trip, "all eyes and long nose," including the one at left. For Ronda, she knew pretty quickly that this would be her horse. "Once we saw DD free jump and got to know him better in the grooming area there was no doubt that we were going to buy him!"

At home, DD "is a very busy and nosey individual. He gets bored easily so we keep a nibble net in his stall. He will literally do tricks for alfalfa - whether it's hay or the alfalfa-based treats. At horse shows especially, he will beg for alfalfa when all that is left is the 'boring' hay. When begging doesn't work - rhythmic knocking the stall front seems to do the trick! 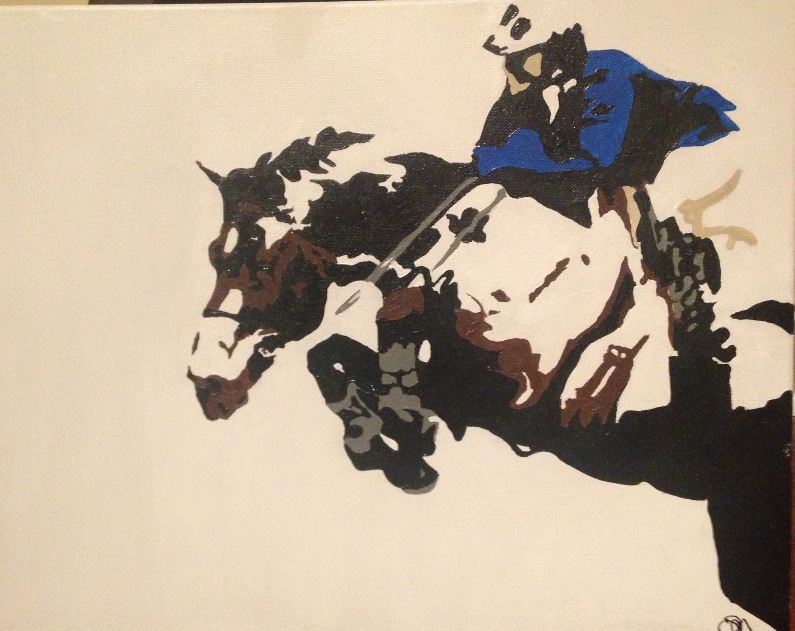 "His favorite place for turnout is the arena and he entertains himself by jumping all of the jumps." In fact, Ronda's favorite story about her stallion is the way he taught himself to jump Liverpool fences. "He taught himself to jump Liverpools. Since Jennifer [Ramsey, Diabolo's rider] once had a World Cup horse that hated water, she is always very diligent about making sure water is NOT a big deal for any of the jumpers. Since DD loves to jump the jumps in the arena - especially putting himself through the jump chute- we incorporated the Liverpool as the middle obstacle of the combination. He jumped right over it on his own. Since then, he has never once looked at a Liverpool on course."

DD's best friend used to be Cartier R, but once they both started breeding they became a little less friendly. Now, his best friend is Relevant K - a big, beautiful gelding by Popeye K. Relevant K -aka Reagan - lives next to DD and is the only horse that can stand next to DD in the trailer. They touch noses and lick each other and when they are stabled next to each other at horse shows - they will share hay under the stall partitions. I'd say that DD also has the most special bond with his rider Jennifer Ramsey.

"I haven't ridden DD in quite a while, but he is, hands down, one of the most fun horses to ride - ever. He LOVES to work, has fantastic gaits and was literally born broke. He also LOVES to go on trail rides." 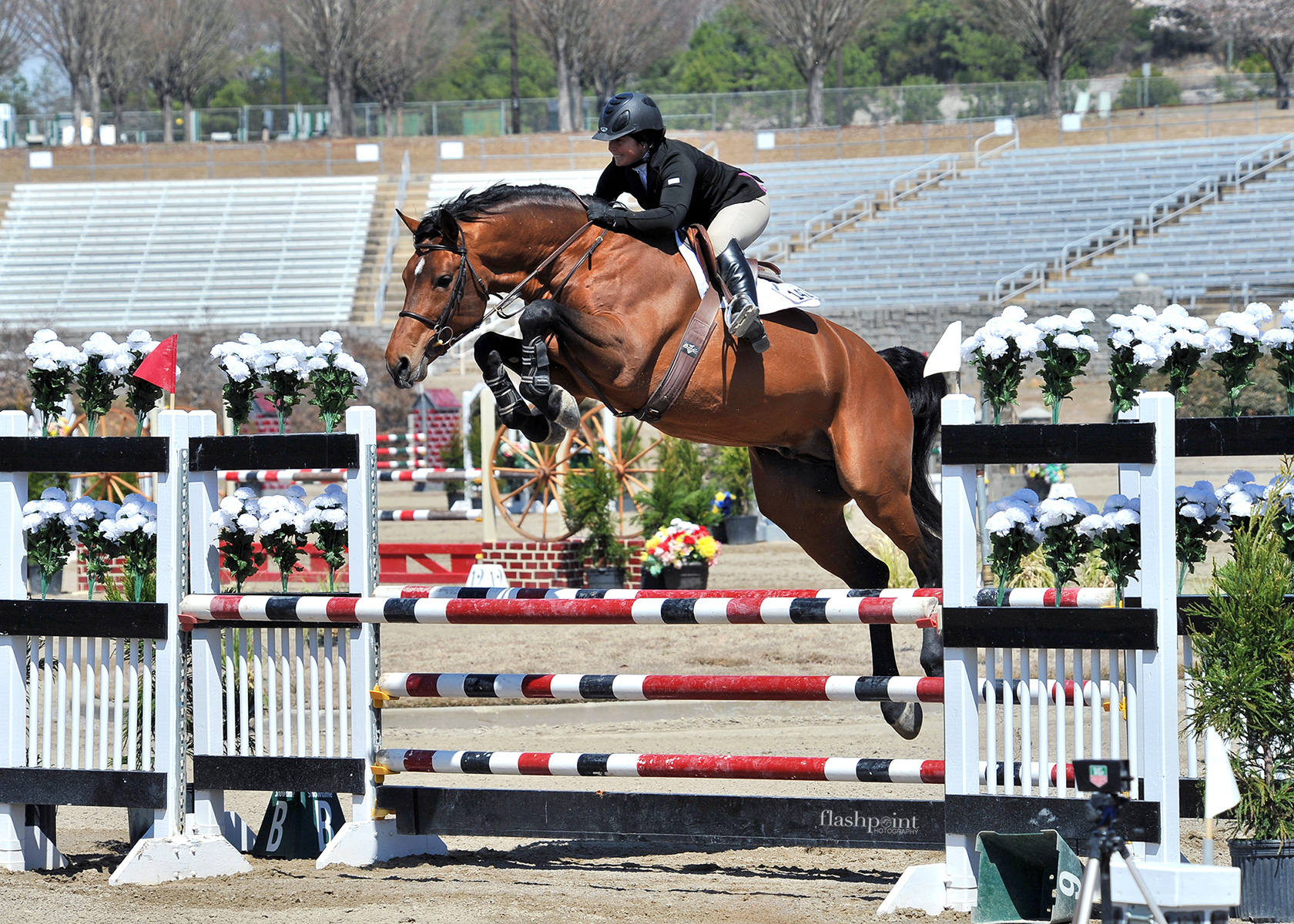 These two photos are the ones that come to Ronda's mind when she thinks about Diabolo d'Esquelmes. "The first is an incredible under-saddle picture of him in Atlanta. The jump is maybe 1.15 meters, but DD clearly thinks it's 1.60 meters! Such a beautiful, powerful, scopey jump! The other photo is a free jumping photo of him when he was 2. His scope, power and height over the fence - as well as his technique - are amazing. 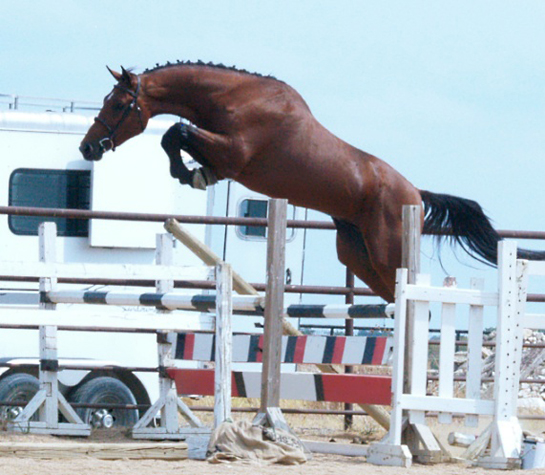 All that focus that makes him "nosey and easily bored" at home makes him thrive in a show setting "DD loves to show. Not only is he a true competitor, he loves the show environment. It keeps his busy mind entertained.